I'm a dreamer, a romantic and I love to make plans and jot ideas down. Very rarely those ideas come to fruition, or those plans are realised, but sometimes they do.
A spurious text sent to my friend Dave asking if he fancied some cyclocross bikepacking to a bothy was met with the response; Hmm...interesting...
Not long after there was confirmation of a couple of available dates; a friday off work was booked and that was the beginning.
The nearest bothy to me is in the Black Mountains, up at the end of Grwyne Fawr reservoir and after poring over an OS map of the area I began to put a route together that would take the two of us from home, to the bothy for an overnight stay, and then back home the next day, avoiding main roads, or indeed roads at all where possible.
Neither of us had used a bothy before and although I'd done a bit of touring previously that had either been supported or solo but always on road. There was no way of booking obviously so it was felt best to plan for a worse case scenario; that the bothy was occupied, and to take kit to ensure we would be dry and warm should we end up under canvas (or lightweight si-nylon.).
I was keen to take food and a stove, so Dave offered to carry the tipi outer and pole and we both had bivi bags to go over the sleeping bags. After a couple of practice packs and a shakedown run I was pretty pleased with my set up, even though I lost a rear light on the shakedown run.
Friday arrived, and later in the afternoon so did Dave ad we began to assemble the bikes and gear. Dave has known me for some time and I can get a little hangry so I noted with pleasure he was packing enough cereal bars to keep a school field trip fed.

First stop was towards Abergavenny to timecheck and contemplate whether to stop for tea at a pub. 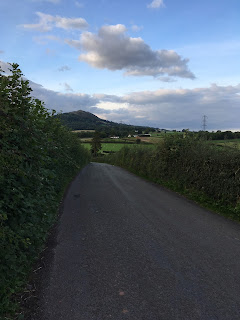 We take the lanes and soon come to the Crown at Pantygelli. Sadly food isn't served until 7pm which may make us rather later than hoped getting to the bothy. Still, always time for a pint... 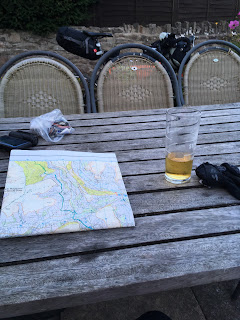 The other bit of good news was that we were still on the right track. Heading from the pub we came to a crossroads and were somewhat surprised to find a sign pointing us towards the ACTUAL place we wanted to be. This threw us as we should have taken a smaller lane off to the left instead of following the sign. 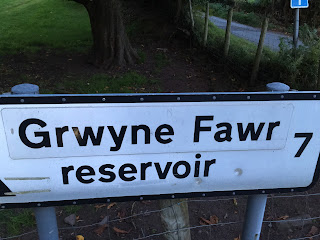 The reason being the route had been planned to take in bridleways and forest tracks and the signed route along a singletrack road skirted the edge of the woods and followed the river, which was nice but not planned. At the end of the road was this sign. 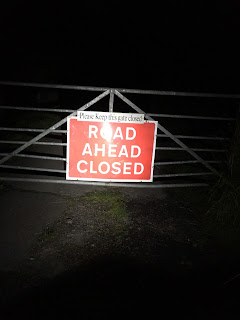 You will notice it is dark. Time had passed and we both agreed that despite there being a couple of opportunities to head off into the woods to ride a bit of bridleway we wouldn't gain anything by doing so. The road was quiet and other than bats we saw a courting couple in a car and a resident in the hour we were on it.
I don't have any pictures for the next hour suffice to say it was interesting and I believe the route at times could best be described as cheeky. We managed to find a way across the river, and then following what appeared to be the marked track we found ourselves steadily coming down to the shore of the reservoir. Not ideal but it would deliver us to the bothy, we placated ourselves with. The grassy track got slimmer and soon we were pushing the bikes along the rocky shore with very little room to be. Eventually that too ran out and we scrambled up the steep valley side through the bracken and found a stock fence. Seemingly we had chosen the wrong side from the outset. Over the fence and along a larger track until we came to where the bothy should be. Our lamps picked it out to the left and down the valley. The other side of the fence. Huh.
Another fence hop and a downhill scramble trying to avoid stumbling down holes and rocks. Then, finally we were at the bothy. One of the positive aspects of not being able to see it from the track, meant that it was unoccupied. In we went, and candles lit. 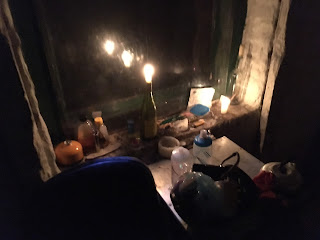 I then got the stove lit and tea cooking, whilst getting a fire going in the woodburner. Dave set up sleeping quarters in the roof space above. One all sorted we settled down to a candlelit supper of curry and rice by the fire. With rum.
Halfway through the rum there was a sound not unlike that of someone sharpening a knife near the door. Dave and I looked at each other and there was a moment when each of us had the thought above. Dave shone his light around and staring back was a mouse. In our defence the mouse was stood next to the axe and on the shovel and the scraping had been it's feet on the metal.
The mouse gave no heed to us and carried on it's mousey business. More later.
With time passing it was time to hit the sack. Up the ladder and into the sleeping bags. 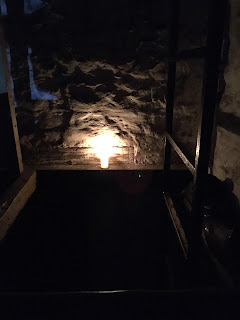 Around mid-morning; 3am, there was the sound of rattling down stairs so down I went. There was the mouse staring back at me and quite happily munching on some bourbon biscuits. The mouse cleared off and I tidied up. 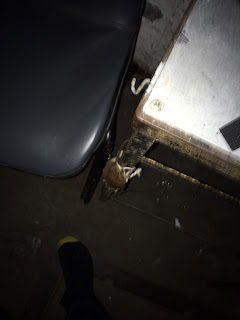 Next morning we awoke a few hours later than planned and while Dave packed I got the washing up done from the night before and then got a brew on for us to enjoy with our flapjack breakfast. 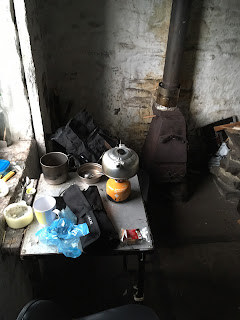 Once all done, the bothy was cleaned and the bikes were laden. After another scramble up the sides we hit the trail again, somewhat easier to spot in the daylight. A beautiful day it was too. 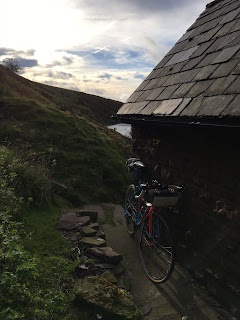 View from the bothy door. 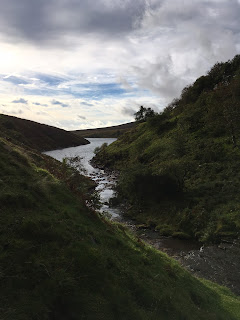 There was a fair breeze blowing in but thankfully it was dry. We picked our way along the top with a mix of walking and riding as the rocky surface and our narrow tyres were not a happy mix. 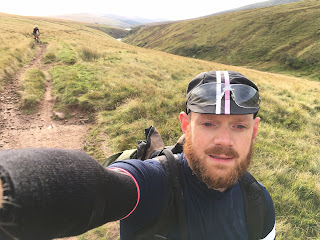 After what seemed like rather a long time (6.2mph average) we reached the end of the flat section and the descent of Y Das to come off the top. This may have been rideable on the mountain bike at home in the shed, but wasn't so great on the cyclocross bikes laden with luggage. 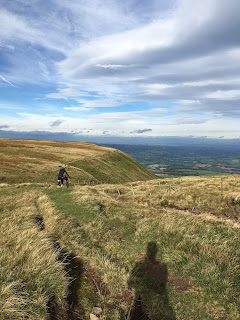 Soon enough the track levelled out and became a gentler descent as promised by the widening contour lines on the map. Back on the bikes and down we went. Pausing and dismounting for the odd section with drainage blocks in. 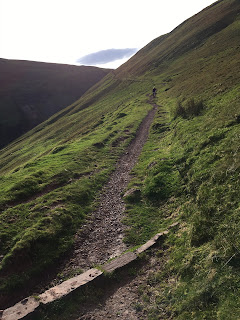 The final roll out was a hummocky grass section. Wheeeeeee.... 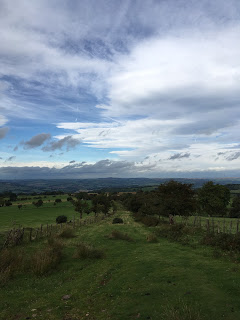 Joining a tiny road again we picked up the pace and kept rolling along nicely. We came to the junction where straight ahead was onto a bridleway and chatted a while with a checkpoint crew of a fell race, they kindly gave us a bottle of water each and then we were away onto the almost-hard clay surface of the bridleway. 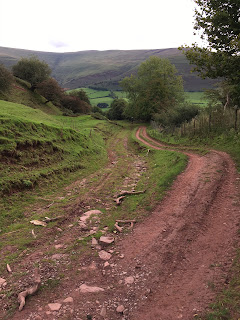 This traced around the bottom of Pen Twyn Glas and dropped us back onto another tertiary road. Deciding to take a final bridleway before Cwmdu we encountered lots of tiny rocks, nettles and brambles, along with the odd fallen tree. Such a shame the NERC act came into place and these routes aren't kept clear through use. 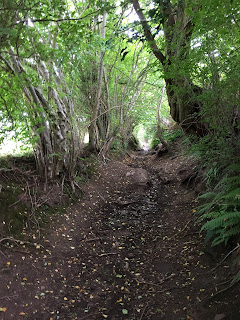 Back on the main roads again and they felt somewhat alien as we headed into Crickhowell for a cooked breakfast at the fine Courtroom Cafe. We made the time cut off by a minute. How's that for timing. 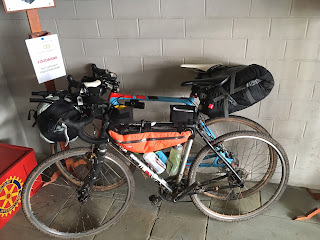 From Crickhowell it was a few more roads and then onto the canal towpath at Govilon to have a flat and quiet run back home. Total mileage for the two days was 63.7miles and 4,780ft of climbing.
Kit: 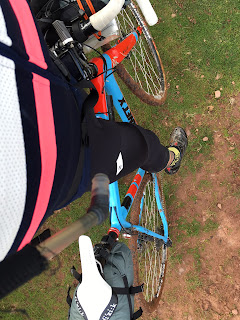 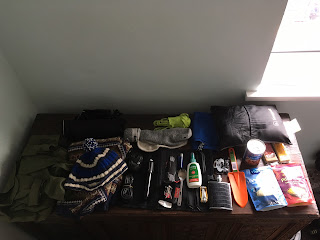 The pillow didn't make the cut. Yes I did use the trowel. Responsibly. Also had 2.5 litres of water in the pack.
I wore my faithful Rapha brevet jersey, merino armwarmers for Friday evening and Saturday morning, Morvelo stormshield 3/4 knickers, bolle safety specs and some DMT Lynx SPD shoes.
Fantastic fun.