From the title you can guess that this is a 3 part journey. I'm not sure whether to record it as an epic. It was certainly an experience.
Originally planned for March but snowed off, Pete and I had picked the second week of July as the date to ride the Lon Las Cymru. I can't remember why three days was decided to be enough to do it but that was what we had given ourselves. All the recommendations were for it taking a week. 'Ah' we reasoned 'we're fit young cyclists on road bikes with minimal luggage'. The pertinent point there being the luggage. More on that later.
Train tickets booked and the day after my birthday we were on the train Northbound to Holyhead.
As Shrewsbury came and went we began to eat our lunch in preparation. 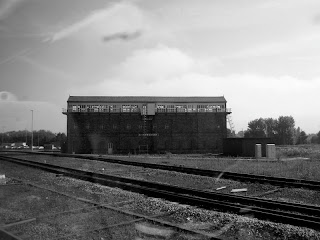 Delicious cold pizza for me, cous cous salad for Pete. Get as many carbs in as we can.
There was a discussion that came and went as the train miles rolled by, 'should we get off at Bangor?' as we only had an afternoon to do the 70 miles to our first stay.
In the end we stuck it out to Holyhead, in for a penny and all that.
Sat inside the air conditioned carriages it was hard to envisage how warm it was outside. It was pretty warm when we had embarked in the early morning but since then the hours had gone by with a cool breeze wafting over us. Bangor came and went and signalled the time to change from shorts and tee into cycling clothes.
Holyhead at the end of the line came and off we got. Consulting the official Lon Las guidebook we had to head from the station towards a pub.
We left the station and saw no pub.
Keeping an eye out for the Route 8 NCN signs there was a little confusion due to the initial lack of them and we did a lap of Holyhead trying to find our way out.
20 minutes later and following the road signs for Bangor we happened across a Route 8 NCN sign, hurrah!
Up over a kerb and pavement and along a single lane road that ended in some bollards to be threaded through before the cycle track began.
But at least we had found it.
The track was tarmaced and seemed reasonable enough, although there was a steady increase in the amount of dog shit and glass as we went along. After a mile or two we wondered why on earth we were dodging that unpleasant cocktail when there was a perfectly serviceable quiet road along side us.
The change from the NCN track to the B road signalled our first departure from the Lon Las route.
A few more shit and glass free miles rolled by and then we came to a section of road that was being surface dressed. Being good cyclists we stayed on the road and waited for the signalman to let us through, rather than ride on the clean gravel and tar free pavement. The temperature was making itself known at this point, climbing into the high 20s as we moved away from the pleasant waft of sea breezes. Pedalling through the gravel coated surface, with the hot wet tar sticking stones to tyres, frames and anything else it could was not fun at all. This was not the first occurrence of road dressing we were to ride through.
An executive decision was made to bin off Route 8 entirely and stick instead to the A5 to get us off Anglesey. With the A55 taking the major traffic, we reasoned the A5 would be reasonably quiet and pleasant to be on.
It's quite a straight road... 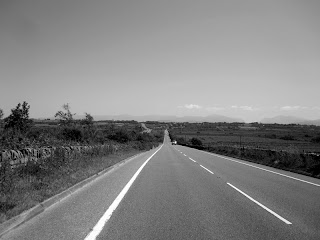 Thankfully though it continued to be shit and glass free...
The mood was pleasant as we were getting into the pedal swing of it now. Still some miles to go though. 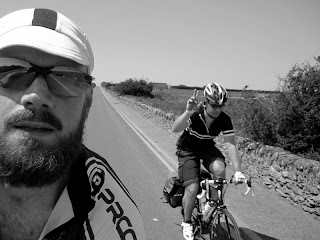 There's not too much that can be said about the countryside we passed through. From reading the guidebook, and personal knowledge, I know there were places we could have stopped and visited. Instead though we span along quite happily soaking up the sun.
There really was very few vehicles on the road. Catching and passing a chap cycling with trailer we shared greetings. 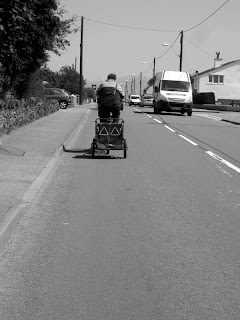 The next area of road dressing was in Llanfairp-g. Here's the station sign so you can read the full spelling 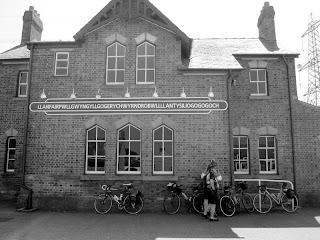 The concerned looking cyclists are a pair of American tourists who had been sticking to Route 8 but had missed a rendezvous point with their support and were now two hours adrift of where they expected to be. With their 'phone not giving them any signal, I sent a text from mine to their support to say where they were and that they were ok. I never found out if they got sorted. I hope so.
Clearing out of the road dressing our next planned break was in Bangor for a brew and a snack. Happening on a Waitrose in Menai we chanced the cafe there, only to find the toilets were closed and we were viewed with a whole heap of suspicion. Pete bought some water whilst I waited with the bikes, the store security guard standing close by having walked through the store to come and get there. After munching a couple of cereal bars and sharing the water we went on.
Over the Menai Bridge! 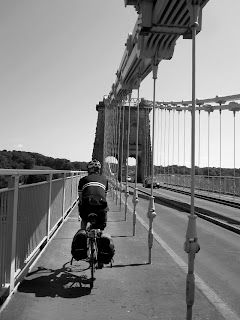 I had been here before for a Dragon Rally breather, but it was definitely warmer this time around. There were people lounging near the water below, I was quite jealous.
From Menai we missed Bangor entirely and dropped onto the road to Caernarfon. The a road was a little busier but we were making reasonable progress. The luggage was making itself felt on the climbs as well. My lovely titanium whippet of a bike had been transformed into a bit of a saggy mongrel.
Swooping down into Caernarfon the search was on for somewhere to eat. Forsaking the supermarket on the edge of town instead we settle into a little butty shop near the centre. Sandwiches, cake and water please!
Time was getting on now, close to 4 o'clock from memory. With food in our bellies we were happier once more. Back out onto the road.
There were the beginnings of undulations now and the heat of the afternoon was very much upon us. At the top of a long but steady climb I paused to snack and enviously survey the sheep taking it easy in the shade under sheephenge. 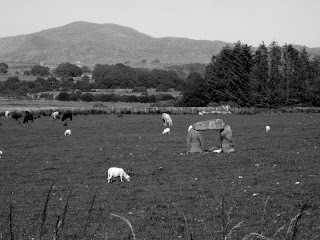 Our next planned stop was Porthmadog. A friend had recommended we have ice cream in Cadwalladers there. All good stuff but I had no idea what the shop front looked like. In the best tradition of sticking to the main road sure enough we found it. The shop front is black, for reference. Coming down into Porthmadog the bike had felt a little slidey. I put it down to the heat and weight of the luggage over the back but upon stopping I found the rear tyre to have slow punctured. Brilliant. Well sod it, it can wait until after I've had an ice cream. 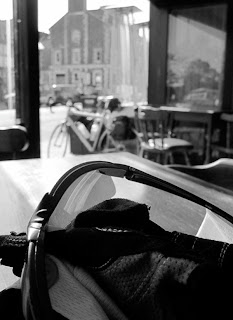 There's no ice cream pictured as the heat was such that I had to eat it swiftly to stop it melting. That's my excuse. After a toilet stop and a face wash we walked over the road into the shade to fit a new tube.
I couldn't find any suspect material in the tyre so reasoned I had just been unlucky. There wasn't much of the day left now, with 6 o'clock approaching. The cafe staff helpfully gave us directions out of town, including how to get on the toll bridge to cut some miles out.
Off we roll then, minds full of pleasant showers and a full meal. 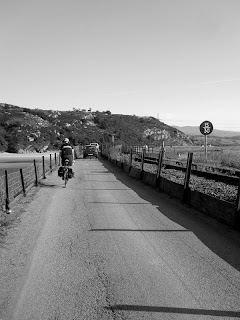 The toll road was open and free, and it wasn't without a little sadness at not having to pay a man in a tollhouse a fee that we rolled over it. The end of the day was getting closer, all we had to do was keep pedalling. The road was even pleasantly flat as Harlech hoved into view ahead, the castle proudly announcing the town's presence before any signage could. 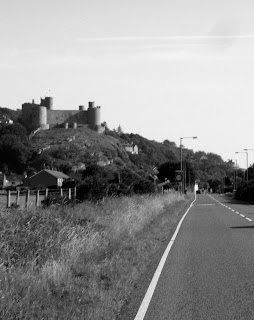 'That's it,' we thought 'a smooth finish to the day'.
Ha.
Straight out of Harlech and the road climbed up. Signs on minor roads to our left warned of 25% gradients.
Oh.
This isn't great.
Up and up the road went.
There can't be much more left, we're almost at the B&B.
On final left turn and there's a hiss from my rear tyre.
Another puncture. Brilliant. Well as long as air stays in it, I'll keep climbing.
Then, there's the stop for the night; Frondirion B&B.
The host greets us at the door, a little past 7pm. We're shown and helped with storing our bikes securely and then luggage off and up to the room. The puncture can wait.
I need a shower and I need food. The hostess kindly brings me a glass of milk to go with the delicious home made ginger biscuits and then it's shower time.
Refreshed, or at least cleaner, we are given a lift to the nearest pub and enjoy a meal watching all the sunburned visitors, envious of their cheer at sinking pint after pint. We've got mileage to do tomorrow. A hangover would not be a good start.
Picked up and back to the B&B, with the sun setting over the mountains to the right of us. 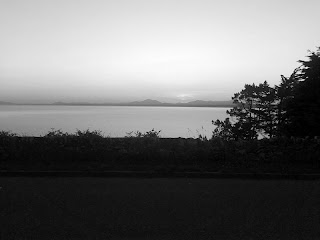