The rise and rise of the 'adventure/gravel/bikepacking bike' has been well observed and truth is for a lot of the riding that takes place casually it's probably a great choice of bike style. I jumped on the bandwagon with the purchase of a deeply uncool Raleigh Maverick Comp last year as it ticked all the boxes for me, and was on sale, and I got discount thanks to British Cycling. Being a tinkerer I couldn't leave it be and so of the original bike, all that's left is the Reynolds 631 frame and cromoly forks, shifters, cables, front and rear derailleurs and cassette, and brake calipers. Oh and the bar tape although that has begun to delaminate so I'll likely change that soon too.
To the real point of this post though. Tyres. I love tyres. I mean I really love them. I have around 15-20 pairs in the shed at least, loose or mounted. Tyres for all wheel sizes I own and all bikes, and some I no longer own. I try not to think about how much money is tied up in them. With the growth of the market mentioned in the opening line, there has been a revival/corresponding growth in the tyre market to suit.
On of the main reasons I plumped for the Raleigh was the very good tyre clearances on the frame and forks. Why is this important? Well bigger tyres means higher volumes means more grip and more comfort. All good things.
My first foray into the larger tyres was with a second hand pair of Compass Barlow Pass in 700x38c size. Skin/gum/tan wall of course. 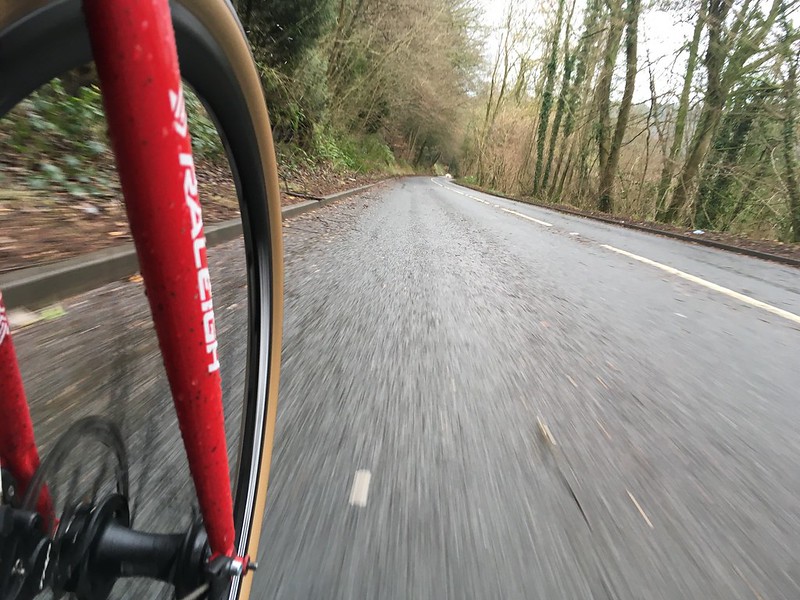 Here they are on the stock Raleigh wheels during a christmas day ride. Great tyres, very supple and grippy but a bit fragile off the road and on the chippings and loose seal that makes up some of the towpaths, sorry gravel, around here. I had a new set of wheels built by the excellent Ryan Builds Wheels over the water in Bristol around an SP dynamo front hub, and a Hope Pro4 rear hub with DT Swiss XM421 tubeless rims and the Barlow Pass wouldn't stay up happily tubeless. As a note, they're not supposed to be, but sometimes tyres will work.

With some trips coming up I was searching for some tyres with more grip for off road, and that would work tubeless. I had narrowed it down to the Bruce Gordon Rock n Road 700x43c, the Soma Cazadero 700x42c and the Panaracer Gravelking SK (small knob, teehee) 700x40c. All built on/by Panaracer in Japan. Being precious and vain I wanted tan/skin/gum walls which meant pre-ordering the Gravelking SK's from Winstanley's Bikes who were very helpful, and ordering a pair of the Rock n Roads from Bruce Gordon himself, shipped to my friends in Canada who we were visiting a few weeks later in early March. This being mid-February and me being the sort of person who can't get an idea out of their head unless it's acted upon. My trip was in April...

Long story short, the Rock n Roads were/are excellent off road on the dry and loose surfaces I rode and slightly draggy but not terrible on road. Which you would have guessed from the tread pattern.
On the 25mm wide rims, they came up slightly oversize 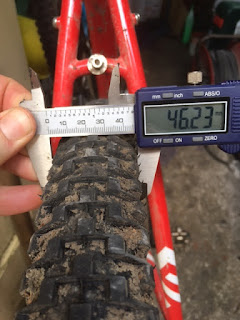 They cleared the frame just fine, and were a lot of fun in use. 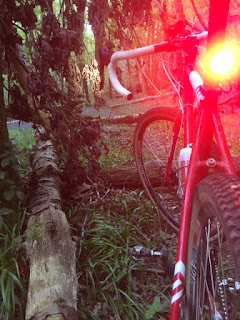 I didn't weigh them, but stated weight was 560g each. I would guess they would be around that. They went up and stayed up tubeless and worked well at around 40psi with camping gear laden up.
The Gravelking SKs arrived last Friday and as I wasn't going to be doing some KGnarr-shredding I swapped them over from the RnRs. They have a coloured wall over a black carcass, as opposed to the RnRs and Barlow Pass's which are black over a tan carcass. Just an observation. The other observation was that the carcass felt markedly stiffer than the other two tyres. Maybe twice as stiff as the Barlow Pass's. 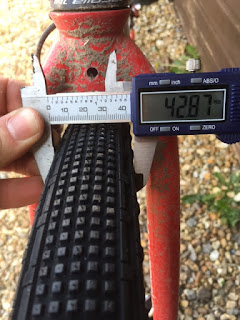 Straight up tubeless and a little oversize, again on the 25mm wide rims so to be expected.
Riding on them on- and off-road they really do roll very well and there was even a lot of grip in the dry. I ran 50psi to begin with as I was expecting a little air loss from the first tubeless inflation. I think they could be dropped to 40/45psi with no problems. I really am rather happy with them. Weight was 490g, and they came up at 498g. Strangely they felt heavier in my hands than the RnRs.
I am waiting on delivery of a pair of the Snoqualmie Pass 700x44c tyres again from Compass for winter road use, this post will be updated.
Posted by User.One at 17:30