Ask anyone who knows me and they will tell you I love fire. as well as loving fire I like tools that you use to make fire. One of those tools is an axe. I have a lovely Granfors Bruks hatchet that I take pleasure in wielding when necessary.
I spotted this cracking video of John Neenan making a hatchet elsewhere.
It's really nice to watch the process.

The Birth Of A Tool. Part I. Axe Making (by John Neeman) from John Neeman Tools on Vimeo.

On the final day of our Canadian jolly I stopped the truck at the side of the road opposite Halifax Cycle Gallery to dive in and see what loveliness they had on display. Truth was I was drawn by the tandems outside, unfortunately it was too late in the day for us to rent one.
Anyway whilst in there getting a souvenir tee shirt I spied some copies of Boneshaker magazine on the counter, and I'd not seen it before so grabbed issues 3 and 4, along with the tee and a snazzy magnetic business card, which I think is genius but will probably kill your bank cards. 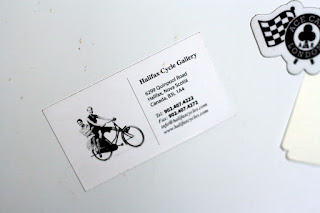 I was eager to read the magazines but such was time and travels that it wasn't until I got home that I was able. I wanted to know where the magazine came from, and if I would be able to get it over here in the UK.
Surprise Surprise then when I found it was produced in Bristol, just over the frontier...
Even more of a surprise was an article in one of the issues I had bought covering Nick Hand's trip Slowcoast. I'd not long read about this in the book I mentioned a month ago, One Man and His Bike, and here was an article on it.
Further perusal was necessary so I went onto the Boneshaker site to find out. There was the book for sale along with more copies of the mag. So I purchased a few.
The book arrived and is almost to lovingly presented to open. 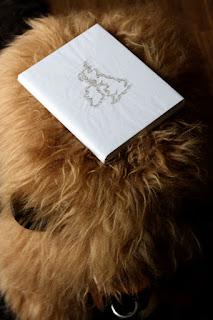 The other issues arrived also. 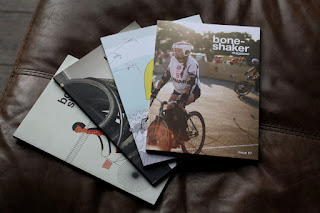 Whilst on the boneshaker blog I was interested in a post on photography, and even more so when reading that the trigger had been a photographer by the name of Mike Lusmore whose name I remembered as he was/is friends with my girlfriend's brother.
Sometimes it's a bloody small world.
Posted by User.One at 18:12 No comments:

Now with extra edited goodness
The second day dawned too early and definitely too shakily for me. After scoffing breakfasts of crepes, cake, croissants, coffee, cereal and cyoghurt we headed to the outskirts of Calais to begin pedalling. 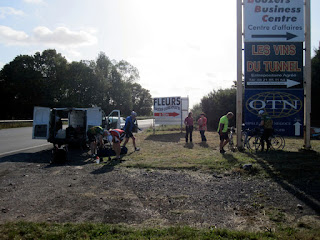 I don't know what was up with me; I suspect that I was just hungry and tired but I felt bloody awful for the morning. Thankfully I just had a tasty cup of MTFU and started pedalling. I'm not going to let my stupid body and mind get in the way of having a good time. After gobbling a date slice and some of Gordon's flapjack I started to feel better. The roads were good mainly, and navigation was easier as we kept to the same roads for most of the day. There were some great vistas opening up and it really felt like we were getting somewhere. That feeling of riding some place new and exciting. It was better even than finding a new trail or road close to home. 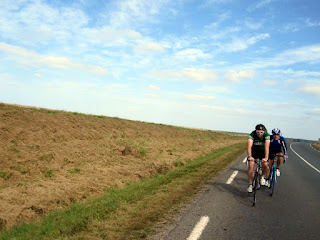 There were some really lovely climbs through almost switchback bends, which then turned into cracking descents along similar bends. I'm going to admit it. I love climbing. It's hard, it makes the heart race, it hurts, it strains and you get to the top and it's just bleeding fantastic. 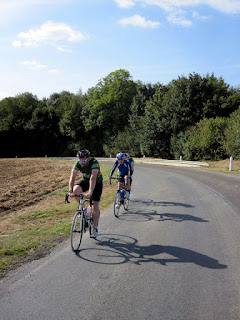 Then you get the rush down the other side. And what rushes they were. The roads were our tarmac roller coaster as we scythed through smooth bends chevroned with warnings that were gently heeded, as our caliper brakes weren't going to heed them any more than that even if we wished. 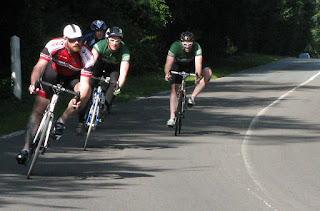 There's something great about doing 45/50mph with tyres less than an inch wide underneath you, every movement is amplified. The corners were taken by picking the entry point, setting the speed and then, for me anyway, turning in and just sitting my elbow onto my protruding knee on the inner side to keep the bars composed as the bike tipped in.It felt so lovely and fluid. Whether it appeared graceful I know not but it certainly felt it.

The roads started to become tree lined, and passing alongside the trees as they cut through the fields was very timeless. 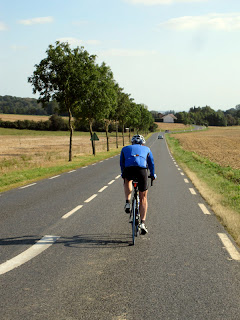 The feeling in the group was good, and the mood was that of being content with the weather and the route. We met up with support group again for lunch, and all sat around in the car park of a small supermarket to eat our baguettes, cheese, meat and ice creams. 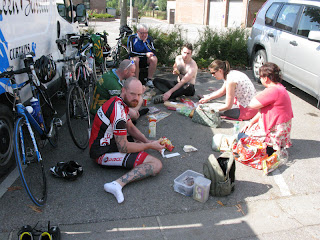 Post-lunch and feeling satiated things were even better, and smiles were never far away. 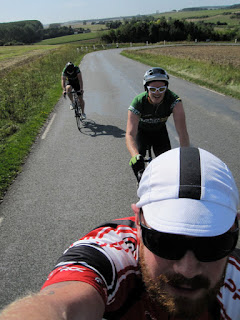 We even had a few sprints to brighten up the afternoon. Jay and I had swapped bikes at this point and I just pipped him. 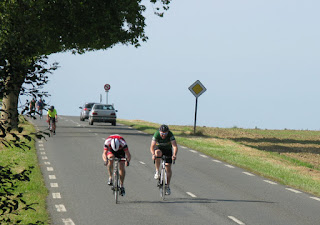 Soon the signs began to reveal that we were getting quite close to our chosen stop for the night. The climbs were more frequent also as the road rose and fell across the plains. 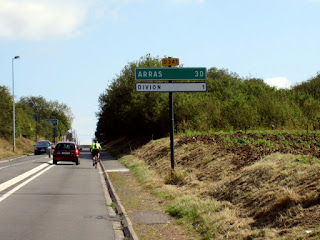 The road, although it was straight, really did seem to peak and trough through the countryside and there were a couple of real doozies of climbs that seemed to go on for a very long time. 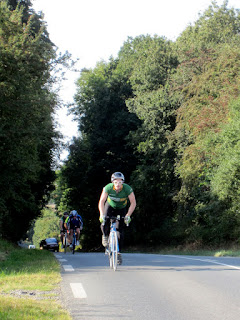 How we Fenland boys managed without getting vertigo, I don't know.
Whilst the scenery was mainly arable fields, there was the occasional interesting landmark crop up that caught the eye. I wonder who decided to paint the water tower here? 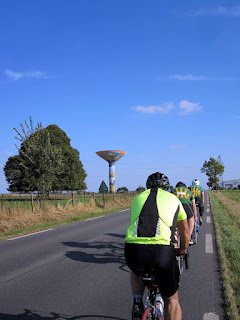 We met up with the support crew just outside of Arras and with a little direction got into our hotel. That evening we headed into town for a slap up meal and for me a culinary first in trying chicken gizzards in a salad. Very tasty.
Distance for the day was around 70 miles
Route here
Posted by User.One at 20:21 No comments:

London to Paris, day one

Just home from a good ride with some good fellows.
Ages ago Jay had the idea of riding from London to Paris. Plans were talked about, emails flew back and forth and training was planned and undertaken. In what seemed like no time at all the date was upon us and we were assembling at the Cutty Sark in London to set off. 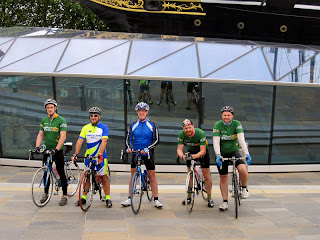 Then, we were away.
Roadbooks had been put together for each day, and a map was stuffed in my back pocket with the route marked on, but it was still only about half an hour before we missed the (truthfully unmarked) exit from the A2 onto the A207, so with a bit of jiggery we found another route and were soon off and out of London, over the M25 and clear of the debris that seemed to flick into eyes as we pedalled along.
The route paralleled the A2 mostly, and joined it along some of the quieter single carriageway sections. Our support crew were in a van and car and we were ahead of them for most of the way out of London, the joys of two wheels over four. Arrangements were made to meet in Sittingbourne for lunch and after negotiating the market taking up most of the parking spaces for the support vehicles we were soon sat outside a cafe eating some grub. Post lunch we pressed on, fuelled by chips and other tasty carbs not used on le Tour.
Close to Faversham and the Shepherd Neame brewery we rolled along single track back roads and took in the smell of the hop gardens being harvested on one side and the orchards bulging with apples on the other. Through Faversham and resisting stopping at a pub to sample the local brew we pressed on.
Canterbury was negotiated after a bit of local advice and we were back out into the open again. The roads now were climbing and falling and it was easy to tell that we were expending energy. 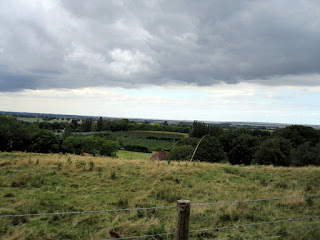 I was starting to feel in need of something to eat and drink. I probably should have had a bigger all day breakfast at lunch time... 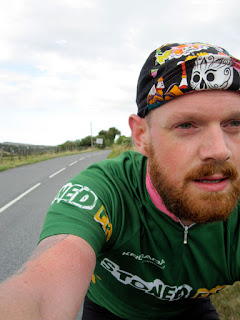 It went a little wrong after this, when we came sailing down a freshly gravelled road through some S bends that had us all feeling a little sketchy with negotiating them at the speeds we were travelling! Safely through we met up with the support crew for an update.
On from there and we missed a turning, though this wasn't apparent until several miles down the ride.
Bugger.
After some map reviewing a re-route was worked and we were back on it. This meant a lot of climbing, which after almost 70 miles was a bit of a shit. There was much cursing, some of it under breaths, most of it not.
Time dragged as we wended along back roads cross country, dodging strimmed hawthorn cuttings which littered the road threatening punctures, and tractors sat on our tails as we kept single file down the narrow routes. Finally we were in Lydden and back on track.
Down towards Dover and mood and momentum were lifted. The skies became bluer, and the going was smoother.
Then, the sign we had been waiting for. 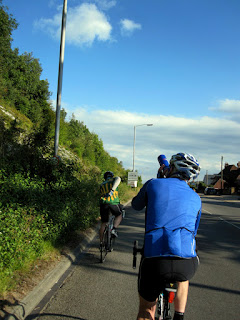 We were in Dover.
Support crew were located and after refuelling the vehicles and ourselves on a BP forecourt we loaded up and headed to port.
The crossing was millpond smooth and we savoured the moment with nutritional beverages. 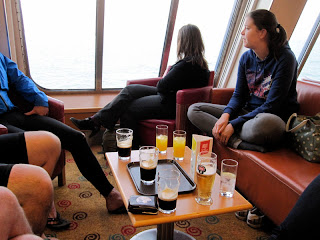 Then, disembarking and a trip to our lodgings for the night; the youth hostel to find the rooms then dash into Calais town centre to find something to eat.
Time was now 10pm local, and hunger was very present. A rather tasty Moroccan/Mediterranean restaurant served us but it was too late for Mick, who pulled a spectacular whitey after eating and had a few minutes face down on the table recovering. He wouldn't be the last to suffer on the trip.
Still within 5 minutes he was back to his normal self and after settling up we walked back to the beds. The next day we were riding in France.
Mileage for the day was around 85.
Route here
Posted by User.One at 18:41 No comments:

Not really sure where we are with the seasons, I'm saying Summer still. Either way today was a lovely day. An early morning ride took in some proper hills, and all the time the sun was shining.
Here's the reservoir nearby at just gone 8am. 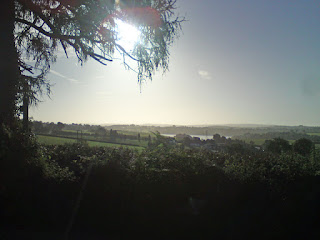